The death threats are pouring in as the propaganda from Sandy Hook Justice and Tony Mead intensifies.

A few days ago, I was aware Dan Bidondi issued a death threat on NY Magazine. Frankly, I  let it go.  As impulsive as Bidondi is dishonest, I didn't actually take it serious.  Perhaps I have been seeing too many death threats and they just roll off.

Dan Bidondi is the Infowars reporter that received cute rubber ducks on his car while at a Connecticut Court House covering Wolfgang Halbig. Bidondi gave the duck to Wolfgang. Wolfgang pretends the ducks were given to him to "stalk him" causing the Lake County Sheriff's Department to run around like keystone cops chasing the shadows of Halbig's imagination.


The keystone Lake County Sheriff's laughably hecked Halbig's gated community logs for signs of who brought the ducks to Halbig's house!!! Obviously, they found nothing. Why? Because Halbig received the ducks live streamed from an Infowars reporter in Connecticut!  Not in Florida! 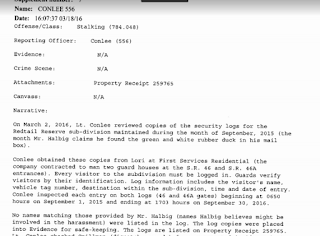 Halbig and Bidondi then began pretending the ducks were poisonous.   Dan Bidondi began threatening to kill anyone who had put the ducks on his car!

Halbig went on Crisis actor's channel to explain how he put the ducks in his mouth.

Dan Bidondi, still feigning rage months later, went to NY Magazine and posted that he was going to track down the Newtown resident who put ducks on his car and kill or maim them.

Sandy Hook Facts explained to Dan Bidondi that the gig was up, SHF knows he and Halbig are lying about the "poison ducks" because the ducks had been tested by Postal and Sheriff's investigators and found to be clean.

Here is the police report where Halbig pretends the ducks were put on his car in Connecticut, instead of Bidondi's. The ducks were tested by police investigators and found to be clean! 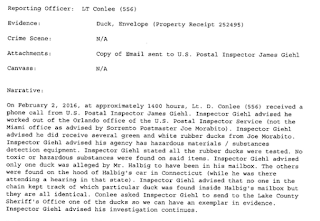 This is now worthy of being a report of an actual threat to do harm.  Apparently, Bidonidi is obsessing on murdering the whichever Newtown resident is responsible for the innocent duckies.

SHF asked Dan Bidondi to clarify his murder/maim plans; however, Bidondi refuses to respond; apparently desiring to keep his evil, violent plan to himself.

Meanwhile, Tony Mead's hoax group is openly planning to shoot Newtown Town attorney Monte Frank and/or Lenny Pozner. Maybe they are planning to kill them both!

Halbig's lies about the poison duck and about the Newtown child is having the desired, violence inducing effect on his more mindless followers. 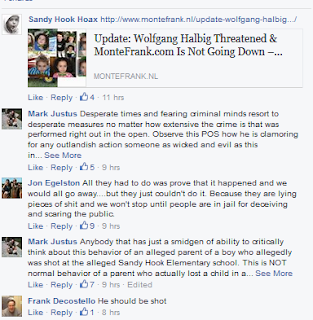 Update 9/18/16
As is well known, Tony Mead monitors every word posted to his group.  Anyone who is not in lockstep is banned, deleted, or berated. The threat to kill Monte Frank is still on his page.
Presented by SandyHookFacts.com at 4:42 PM

NO DEATH THREATS WERE MADE!
I stated I am going to shove the ducks down their throats who sent poisoned ducks and got us sick.
So stop trying to reverse this as if we are the criminals when them sending things like that in the mail is a federal crime.

What would be your justification? Putting a rubber duck on your car that tested PERFECTLY CLEAN... no toxins whatsoever.

Sorry, that would be an unjustified assault on another person and an disproportionate response. It is not reasonable or rational You need to reassess your mental condition because you are obliviously a danger to society.

In addition to lying about the ducks, you are very violent.