At 11:00 am today, Feb. 18, 2016 in Hartford, Connecticut, Wolfgang Halbig is making what he claims is his last FOIA Hearing appearance.   FOI Principal Attorney Victor Perpetua is the designated hearing officer.

The hearing is versus the Connecticut State Police and Wolfgang wants the following items:

I can't tell you how surprised I was to learn that Wolfgang was not requesting the audio from Chopper 1, considering he has mentioned it so many times.   Where did the request for Chopper 1 audio go?

Wolfgang has already received the Dashcams for Seabrook and Sinko; however, it is conceivable the FOIC orders them released again.  The State Police claim the Dashcams of Bahamonde and Chapman as well as any officer statements are exempt from release.

The Connecticut State Police have referred Halbig back to Newtown to obtain Newtown documents.  It is therefore unlikely the CSP would comply with any FOIA order without a Court fight.


Will the FOIA Commission allow Wolfgang Halbig to dominate the Commission as he did in the past?

Last time, Commissioner Streeter allowed Halbig to grandstand, showboat, and waste time.  Let's hope that this time, the Commission maintains some control of the forum.

Abuse of a Newtown Resident
Wolfgang has sent subpoena to several Newtown Officers. It is likely Newtown will once again send a representative in the stead of the officers.  Other than Newtown, one subpoena raises the specter of sanctionable conduct by Kay Wilson, as an officer of the court.

L. Kay Wilson has issued subpoena for appearance of Newtown Bee reporter and volunteer firefighter Shannon Hicks.  Ms. Hicks was one of the first on scene and took this iconic photo, among other photos. 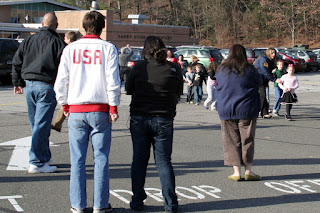 Wolfgang and his partner, James Fetzer, have falsely accused Shannon Hicks of fraud.  Wolfgang has made the horrible comments about Ms. Hicks in  interviews and has even co-authored a book with James Fetzer making absurd, slanderous, accusations.  Wolfgang has promised he would sue the Newtown Bee, a promise Wolfgang has broken.

It is therefore very curious that Wilson has called Ms. Hicks into a CSP FOIA hearing on the heels of her client's abusive and bullying conduct and statements.

What relevant information could Shannon Hicks possibly offer concerning documents that may or may not be in possession of the Connecticut State Police?  The scope of the hearing is very narrow.

Was the subpoena sent merely for Wilson's client's fundraising efforts or meant to harass?

How much leeway will Kay Wilson get to abuse this private citizen in Newtown on behalf of Conspiracy theorist leader Wolfgang Halbig?

The only thing that is for sure is that Wolfgang will use tomorrow's gimmicks to line his pocket book with cash, as he approaches the $100,000 in hoaxer earnings mark and prepares to "retire" his activities.

One wonders what has Wolfgang Halbig accomplished for nearly $100,000?

So many simple questions ...

Presented by SandyHookFacts.com at 5:31 AM