Per the IRS - Tax Fraud is:Any person who willfully attempts to evade or defeat any tax imposed by this title or the payment thereof shall, in addition to other penalties provided by law, be guilty of a felony and, upon conviction thereof and hall be imprisoned not more than 5 years and fined not more than $250,000, or both, together with the costs of prosecution.  Tax Fraud is investigated by the IRS. All suspects are considered innocent until proven guilty.  https://www.irs.gov/uac/Related-Statutes-and-Penalties---General-Fraud

Filings show that Wolfgang Halbig appears to claim only the income generated for
Sandy Hook Justice through GoFundMe for all of 2014.

No cash, check , money order, or Paypal  donations appear to be claimed, at all!

Wolfgang Halbig also claimed a $5,441 loss in 2014,
receiving some level of Tax Shelter for his shilling for Sandy Hook Justice donations.

Numerous commentators online have claimed to Send Halbig cash and checks through the mail, such as this 2014 comment:

Sandy Hook Justice filings reveal even more oddities and accounting inconsistencies; an investigation is ongoing. This article will focus mainly on the income claimed.

Maureen Crowley, a faithful Wolfgang groupie who follows Wolfgang very closely on many of his "business trips" has bragged about mailing Wolfgang donations via check countless times over the years. For example, in 2-1-16 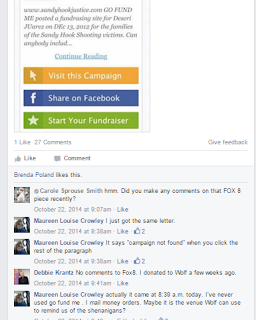 Is Crowley lying about mailing her hero money?
Now, in fairness, Maureen Crowley could be lying through her teeth about mailing donations to Wolfgang.  Sandy Hook Facts has no way of knowing who is lying; however, it seems someone is.

Of course, if Wolfgang fails to report all Sandy Hook Justice income, that is potentially felony Tax Fraud.


I'm no CPA, but by a layman's reading of the filing it seems the only way that the filing is correct is if Wolfgang did not receive a single dollar via any other source in 2014. No money came in, except from GoFundMe, at a staggering $31,358. 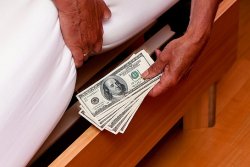 "But small business owners aren’t saints. They are also America’s top tax cheats, according to Internal Revenue Service (IRS) taxpayer advocate Nina Olson. Not all of them, of course, but, on average, small business owners are much more likely than other Americans to underpay their taxes."http://smallbiztrends.com/2013/01/small-business-tax-cheats.html

Investigate and decide for yourself

Wolfgang Halbig received a 1099-K from WePay/Gofundme listing donations as  $31,358.  Since that was a tax document, Wolfgang HAD to claim that income.  Notice that March 2014, when Wolfgang went "viral", he collected over $15,000 in funds via GoFundMe.  No one donated any other method? This, despite that fact that Wolfgang Halbig advertises for Paypal and US Mail donations via his website, as shown below.

Is this being read wrong? 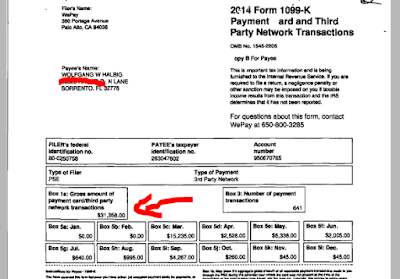 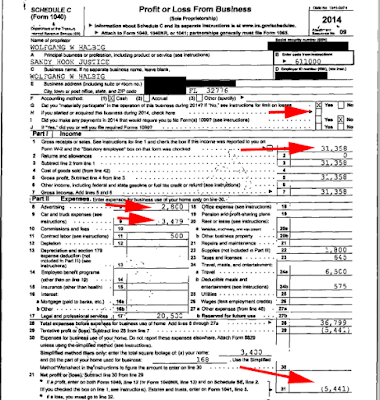 Webarchive shows Paypal in place in March 2014
A webarchive screen shot shows Halbig's PayPal Donation link in place as early as March 2014 and still in place in December, 2014. Where are those donations, if any, claimed?

Paypal is the most popular method of sending money. Are we to believe not a single person donated to Wolfgang Halbig via Paypal in 2014 while over 600 people choose GoFundMe?

Are we to believe that every person who posted online that they were mailing Wolfgang a donation were lying? All of them? Every time?

This is unheard of!

According to Wolfgang's own filings, in August 2014, with 4 months to go to the end of the tax year, Wolfgang Halbig claimed total revenue of $32,000. Somehow, between August 2014 and December 31, 2014, Wolfgang's gross receipts dropped by $642.  Further, we are asked to believe not one person donated a so much as a dollar between those months. 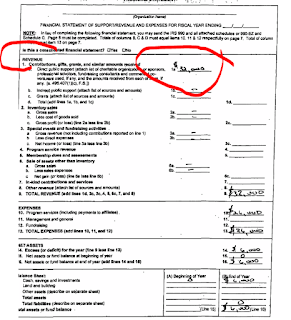 In yet another filing, Halbig wrote in his own handwriting that Sandy Hook Justice had "$6,000 in the bank" - yet somehow Wolfgang receives tax shelter claiming a loss of $5,441 on the year. 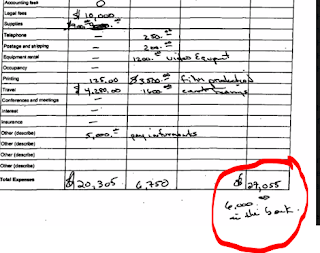 There are many other anomalies present in the various filings of Wolfgang Halbig and Sandy Hook Justice.  And despite Halbig's promise of "transparency" during early 2014 interview with John Wells, no full accounting of funds has ever been publicly made.

It would take a substantial discovery and investigatory process involving all of the Halbig household finances to shed the appropriate light on this serious financial matter; that would be for, perhaps, another day.

At this time, Sandy Hook Facts has no way to know if Wolfgang is telling the truth in his filings; however, it seems highly unlikely that donations were limited GoFundMe.  Other obvious discrepancies only raise more simple questions.

One day we may know, whether through an IRS investigation or through court discovery process. 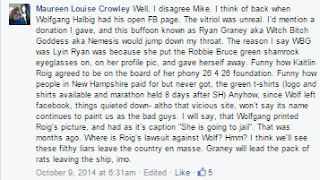 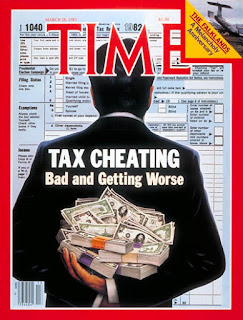 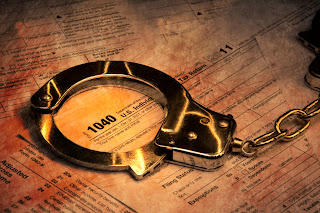 Presented by SandyHookFacts.com at 6:21 AM

I had my suspicions too about all of this. Hes only ONCE provided a break down of his spendings and it was less than anything I could call a reliable or credible audit. In fact he was so pissed he had to do so...well you know the story.

I recently requested some public transparency and he still hasnt responded. Funny too. Today my profile got struck down for pornography. Wonder why...someone doesnt want me asking these questions. Do they?

Break down the walls Wolf. Show me the money!

not that's i'm defending this creep - but aren't gift exempt unless they exceed a certain amount?