The Superior Court in New Britain, Connecticut has set a hearing in the Commissioner, DESPEE (Connecticut State Police - "CSP") vs Freedom of Information Commission case.   This is the "Dave Altimari/Hartford Courant Adam Lanza documents FOIA appeal. 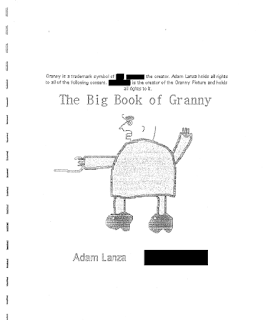 
The Hartford Courant submitted Freedom of Information Requests for 35 documents related to the Sandy Hook shooter.  These documents include drawings, the "Big Book of Granny", class photo from Sandy Hook Elementary School from 2002-2004, "Lovebound" a play about a love affair between a 10 year old boy and a 30 year old man, and the infamous "Spreadsheet of Mass Murders".

The FOIA Commission ruled in favor of Altimari; ordering the CSP to release copies of all of the documents.

CSP appealed, arguing that seized evidence is strictly confidential because it is seized evidence in a case and it "might be returned"; although CSP does not dispute they maintain a copy of the records in their files, even if the originals were returned.


Attorney Victor Perpetua, the hearing officer from the recent Halbig hearings, submitted the Commission's legal brief in support of disclosure  to Altimari.  An impressive read that carries the weight of a sledgehammer.  Attorney Perpetua argues the powers of the Commission to decide these matters, the limited over site responsibility of the courts, and the fact that the records are obviously Public Records under Connecticut Law since they are nonexempt records being maintained by a public agency.   Perpetua also points out the weak case put forth by CSP; thus CSP cannot now make additional sweeping arguments not originally put forth at the hearing.

The document is an impressive argument in favor of the public's right to information. 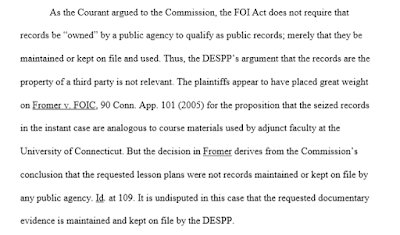 As with the Halbig case, CSP Attorney Christine Plourde again stated she never viewed the evidence for which she is the representative.   Plourde's nonsense hurt the CSP vs Halbig because had Plourde viewed the videos, she would know that minors are on the videos the FOIA Commission will surely order released.  Thus, she missed using a codified exception.

Here, Plourde's failure does not matter so much since we are talking about the shooter; the shooter is not a minor and the shooter should be, figuratively speaking, hung from a hook in town square, for all to see. 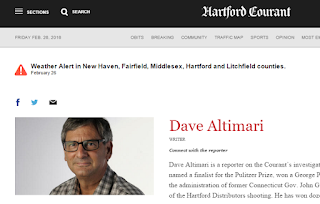 Sandy Hook Facts has covered this case extensively because SHF also FOI'd the same documents as Dave Altimari (among many other documents), separately, and was also denied by CSP.  Lacking resources to pursue the appeal; Sandy Hook Facts is very interested in this appeal and offers it's full support to Dave Altimari.  If Altamari wins his appeal, SHF will submit renewed FOIA requests.

Sandy Hook Facts continues to support and work for the release of all information relevant to the Sandy Hook shooter.

Case may be viewed here:
http://civilinquiry.jud.ct.gov/CaseDetail/PublicCaseDetail.aspx?DocketNo=HHBCV156029797S
Presented by SandyHookFacts.com at 5:34 AM