Update: We have the audio:
https://soundcloud.com/cw-wade/tony-mead-jon-reich-authors-article

"Jonathan Reich [and] a couple of other guys worked to put together a piece on the facial similarities of one Jane Roe {Name Redacted*} and Avielle Richman" -- Tony Mead, Sandy Hook Hoax Group Owner 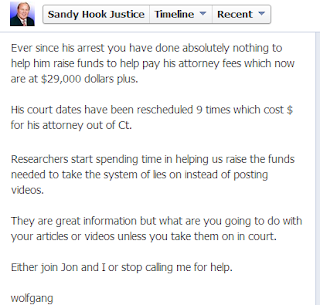 In our most recent article, SandyHookFacts.com attempted to bring awareness to the fact that hoaxers were launching a coordinated cyber gang-stalk of a young Newtown girl, Jane Roe { Name Removed by Request*} :


The cyber stalk began with an "anonymous" article published on MonteFrank.com that was republished by Florida Atlantic University Professor James Tracy.

The article is entitled:
Monte Frank, Jeremy Richman, and Curtis Urbina Have a Lot of Explaining to Do 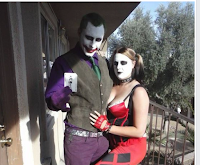 The article absurdly and without any evidence whatsoever accuses a little girl and/or her family of numerous crimes and of being part of wild government conspiracies and cover-ups.  The entire article is based on a slight similarity of a photo.

In general, separating Sandy Hook Hoax "hoaxers" from most other conspiracy theorists is the hoaxer propensity to stalk families and little children and to commit violent crimes over their irrational beliefs.    Numerous Sandy Hook Hoaxers have been arrested and prosecuted for various serious crimes; at least two known Sandy Hook Hoaxers have gone on shooting sprees.  One Sandy Hook Hoaxer shot two  police officers in the head as they ate lunch.  This is cause for all the alarm.  The subject of this article, Jonathan Reich, was, of course, prosecuted over misdemeanor harassment charges.

As a part of the article, the hoaxers committed outright fraud, flipping a photo of Avielle Richman and labeling it "Jane Roe { Name Removed by Request*} " in order to falsely convey that this is how those images were released to the public.

MonteFrank com is a sister website to HartfordCommunityCourt com, a fake blog pretending to monitor Hartford Community Court; however, all it really does is whine ad naseum about Jonathan Reich's legally insignificant misdemeanor; a misdemeanor that was plead down to a pre-plea diversion with no jail time on a charge of harassment.

The websites link to each other, are near identical in appearance and style, are cited together by hoaxer leader Wolfgang Halbig, and while the Whois information is kept confidential, they were registered from the same, obscure, registrar account.

Despite these efforts, many speculated that the author of most, if not all of the articles on both websites, especially those focusing on Reich's harassment case, were likely written by Reich and we additionally suspected he authored the article regarding the young girl and her family.  While we suspected that was the case, no Sandy Hook Hoax administrator was admitting it.

The articles were published pseudonymously, using a fake name: "Barry Miller".   Thanks to Tony Mead, we now know the true author.

Despite the lengths the two blogs have gone through to hide their tracks, Tony Mead freely admitted the name of the author in a recent Sandy Hook Hoaxer Chat called Max Resistance Round Table (this chat has been archived by Sandy Hook Facts).

Tony Mead is, of course, close personal friends with Jonathan Reich. Mead is also the owner of the Sandy Hook Hoax group.

Tony Mead stated: "As many people know, Jonathan Reich, and uh, a couple of other guys worked to put together a piece on the facial similarities of one Jane Roe { Name Removed by Request*}  and Avielle Richman... they did a little presentation of that and I put that up on the Sandy Hook Hoax page".

That information was the above listed article, removed by facebook for DMCA violations, and was a link to the MonteFrank.com article; therefore, Mead is admitting Reich is a MonteFrank.com author.

This is the first confirmation from a Hoax Group official that Jonathan Reich is indeed authoring these articles, as was suspected all along.

Latest Ruse - Calls "released"
The latest ruse involves the release of the purported "Jonathan Reich" phone calls. The point is to prove the calls were "non-threatening" and thus, Jonathan Reich is "innocent".

Unfortunately for Reich, the facts are he was not charged with making "threats"; he was charged with harassing calls. Reichs charges make no mention of "threat"; that would have been a different charge.

This latest ruse, also likely authored by Reich (we are waiting confirmation by Tony), states "Through the audio, we cannot tell here if the voice calls are masked or if they are an actual person at this time".

This is laughable since the calls sound like a "weirdo freaky Jason type stalker head case with a voice changer" and it is no wonder the recipient of the "weirdo" calls called the police.  Considering that in the immeduate aftermath of the Sandy Hook shooting many hoaxers were calking in bomb threats and other horrible acts, who wouldn't have called the police over a weirdo with idiotic questions and a voice changer?

Even more laughable, the blog states he was trying to help the families.  With a "helper" llike Sandy Hook hoaxers using voice changers and fake names making weirdo calls in the immediate aftermath of a shooring, do you really need enemies?

The law under which Jonathan Reich was prosecuted has nothing to do with threats but everything to  with weirdos:
http://law.justia.com/codes/connecticut/2011/title53a/chap952/Sec53a-183.html


After listening to the calls this writer feels that it is unfortunate Reich's high priced law firm was able to work him such a good deal.  Perhaps jail time would have taught him a lesson he obviously needs.

Sandy Hook Hoax crowd are nothing more than disgusting bottom-feeders. They have no idea the world of hurt that will rain down upon them if any of the victims families are harassed or hurt by one of their mindless morons.

i wonder if Reich's continued involvement in harassing the Sandy Hook community and this innocent family - including an innocent child - violated the terms of his legal settlement. perhaps an effort should be made to get this latest evidence in front of the judge who handled his case to determine if he remains a threat to the community and is in violation of the terms of his release. i am SURE his dad's legal team had to agree that his retard son would stay out of trouble and cease and desist harassing Sandy Hook community members. i am certain.

someone should organize a letter campaign to the judge in this case. you could see Reich behind bars.

I agree, someone needs to inform the judge to see if Rich is violating the terms of his plea deal.
Also has anyone contacted Monte Frank to see if he is aware that his name is being used in this manner as well.

i think someone also needs to inform any and all business relationships his father has as well. family, neighbors, business partners, clients - all need to know that this lawyer's son is responsible for an ongoing harassment campaign against Sandy Hook survivors and families.

i am tired of these stalkers and LIARS getting a free pass.