The Hoaxer's newest 'Celeb De Jour' is "Joe Jones", who bills himself as "offering a $25,000 reward for proof Sandy Hook was real".  Jones appears fond of making misleading and false claims.  For example, he categorically states that the Honda found at Sandy Hook was not registered to the Lanza family (a lie, it was registered to Nancy Lanza) and he misrepresented National Weather Service data. His belief that those involved  were  crisis actors and the shooting was a "drill" with the goal of everyone "turning in their guns and becoming good communists" literally flys in the face of common sense and reasonableness. Likewise, Jones' claim he is offering a reward is patently false.

The Joe Jones' hoaxer gimmick is simple; "a reward, a real life reward" is actually a wager, a bet contract whereby you put up  $25,000, Jones puts up $25,000 (of course you must believe that his claim of having $25,000 isn't merely another false claim of his).   The evidence would be given to a third party attorney would would determine if it is irrefutable.  The fact he conveniently hides is that a disinterested attorney would need significant direction and hours study to authenticate the evidence Jones claims to be looking for.  Worse, the direction to the attorney would come from Jones, who lacks understanding of basic facts on the tragedy  (even Swan had to correct him numerous times), and those hours would be deducted from the payout.   If after (mis)direction by Jones, your evidence is found to be "irrefutable as to the entire event of Sandy Hook", you would you get any money left over after the attorney takes his share.  Presumably, any other result, he gets the money by claiming you are "debunked". 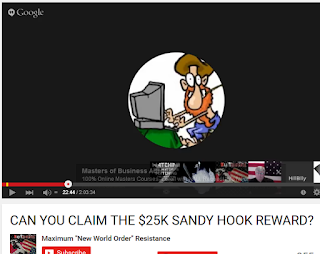 
As Jones gets into the details of what he would do if he lost a child, you quickly realize Jones is actually sending you on a quasi-treasure hunt of deceased child's and family effects, with a wager on the side and a "gotcha" at the end.

In Jones' example of what he would do (this from a guy whose Online Date Ads displays repeated contempt for children) IF  "I had a son who died and someone said I was lying," Jones continues, "I would show up at his door step with his birth certificate, death certificate, his medical records, his school records, the photo albums, I would bring his clothes, I would bring his toys, I would bring everything to that person's house and say here is the proof that my son lived and my son died.  It would be easy to do."


But before any of you Sandy Hook parents load up a U-Haul with all the personal effects of your beloved deceased child, their toys, their clothes and the like, to take it all to Joe Jones' house in hopes he paws and drools through it a little before you get the exciting opportunity of wagering $25,000 (minus substantial attorney fees of course) that this collection of stuff satisfies fools terms, he has already moved that goal post.

Because, unfortunately for you, as he points out, his anecdotal example of what he would do was not meant to be an example of what is needed to satisfy the terms of the wager.   Irrefutable proof of entire Sandy Hook "event" is needed.

Jones mentions other things on his wish list - marriage certificates of the parents of the children, proof of their checking accounts (surprise), all their home deeds and car registrations, urinal size at SHE, you know ... normal stuff he feels owed for .  But wait, there is more that you get to do to crawl on your belly to claim the *cough * cough "reward".

During the 'Maximum Resistance round table discussion, 'Swan' attempted to press Jones for details of what would be irrefutable proof.  Jones, as Swan pointed out, danced around the question, providing yet another "if I went to your mom's house and offered proof of your childhood" useless anecdote.  Predictably, Jones concluded that even though he had just spewed his anecdote, it really wouldn't prove anything as to Sandy Hook; so that won't work for the 'ole wager, either.
.


It's worth mentioning that one parent has already released the evidence Joe Jones states he would use to prove a "child's life and death".  Jones, predictably dismisses that as "photoshop".   (Of course, Jones, like all other hoaxers, doesn't have the guts to spend $20 to verify a death certificate's authenticity).

Remember, YOU must prove the "entire Sandy Hook event"; and for that you are going to need a much bigger U-Haul.

"One or two pieces of evidence does not validate Sandy Hook. Sandy Hook is about twenty children with six or seven years of life and there must be enough evidence out there..."

You will need to bring proof of all twenty murdered children, "proof that they lived, proof that they died, and proof that they were children of the parents".  But before you go  wrenching the most prized personal belongings of twenty murdered children from the respective families, i.e., those child's school records, personal medical records, and all of their family albums, little children's clothes and toys,  and pile them into a U-Haul along with your $25,000, in small unmarked bills, to take to Jones house in hopes you have finally met his standard for winning the wager; even that particular goal post already moved.

"What about proof the school was fully functional, would that do it?" Swan asked, attempting, in vain, to elicit an actual answer from Jones.  No, that would not do it. The entire 'Sandy Hook event' must must be irrefutably proved.'


At this rate, one cannot really fathom what direction Jones would give an attorney as to what would constitute "irrefutable proof that Sandy Hook happened"; however, it's clear that you are competing with the constantly shifting measuring stick of a paranoid conspiracy theorist who does not even have a firm grasp of facts of that day, let alone what would be "proof" under his wager terms.

While Swan did press Jones on the question of "what would be proof" several times, Swan kept getting distracted talking about himself and his phish blog; so we never did get the answer from Jones, who ducked the question at every turn.

Therefore, I have bad news for any of you Sandy Hook family members who were actually considering humiliating yourself in front of Jones, while he mocks and degrades the memories of your deceased child; the wager is sucker-bait; a laughable stacked gimmick designed to give another rambling, wild-eyed old man his 15 minutes of Youtube "fame".  It seems to me Jones would be better off  receiving psychological assistance and medication than anything he could hope to gain from the personal effects from victim families.

Another thought; perhaps he is a Johnny come lately actor; maybe Hillary Clinton has sent this Joe Jones out just to make conservatives, such as myself. look very bad,  by parading this fool around pretending he is a conservative.

Joe Jones has responded by piling on more lies.  First, he claims his wager isn't a wager.. then later he says "if I win".. freaudian slip?  It's simple, genius:


WAGERS. A wager is a bet contract by which two parties or more agree that a certain sum of money, or other thing, shall bepaid or delivered to one of them, on the happening or not happening of an uncertain event.

Secondly, he says Wolfgang has been trying to get the Death Certificates but "they won't give them to him".  This is his excuse as to why he is too cowardly to attempt to verify the certificates he falsely claims are "photoshopped".

Despite Jones lies, the FACTS are the Death Certs are available for purchase as public documents. Furthermore, Wolfgang has never announced he is trying to get the Death Certs and in FACT Wolfgang freaked out when SHG started trying a little money making to "buy the certificates".

It appears when Hillary ordered Jones to go out onto the web and make conservatives look like wild eyed freaks, she forgot to teach him Hoaxer history. 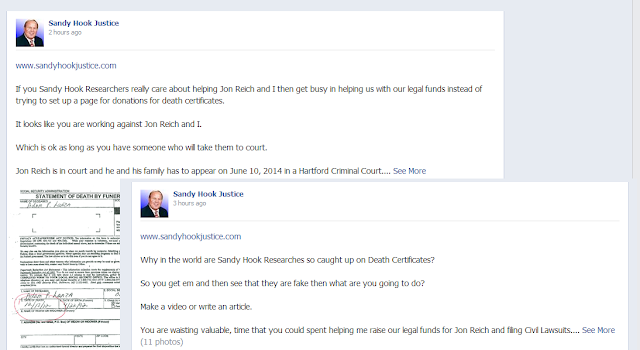 Correction
It appears Jones is "offering" to pay for the investigator if in fact he gets some sucker to try to take him up on his moving goal-post wager... irrelevant, but correction duly noted and made.

Presented by SandyHookFacts.com at 6:38 AM

+DJ Kenada Did you find Dayea a decent place to live yet? That trailer looks pretty moldy and unsafe for a child.

So, is "DJ Keneda" Brian? Darn, thought for a minute I had a new lead on a certain someone from manitoba.. anyway, to Max Res... Np!

Yep, that's Brian. If letting your child live in poverty while you live out freedom fighter fantasies isn't child abuse, I don't know what is.

ow he is claiming a) its not a wager. He might want to utilize a legal dictionary B) a wager isn’t a contract. He might want to expand his knowledge a little, or might want to look this one up. C) that Halbig has been trying to get the Death Certificates and they wont give them to Halbig. He’s such a lamer noob he doesn’t even know that Halbig, about two years ago, pledged to donate to SHH Group to get the DCs, then stiffed SHH Group of the money, reneging on his deal, when they were going to order the DC’s, with Halbig saying the DC’s were a waste of time (or words to that effect). LOL! What Noobie lamer.

Yes, Joe Jones, you, like Halbig and Hoax Group and Fetzer and James Tracey are ALL cowards and will not verify the authenticity of the DC’s.. instead LYING about them, falsely claiming they were photoshopped.

its pathetic about how little he knows about this. hillary didnt train him well at all

Can u stop with the Hillary bullshit? It's making you look as stupid as them.