The People versus Wolfgang W. Halbig

As has been widely reported, Wolfgang Halbig is facing charges related to distributing the detailed personal information of Lenny Pozner; including his driver's license number, social security number, etc.  Halbig has engaged in this activity for years. In fact, a calling card of the hoaxer is "doxing" Sandy Hook victims personal information.

The probable cause statement for the arrest of Wolfgang Halbig details that Wolfgang Halbig also sent the "full and comprehensive TLOxp report about victim Pozner" to others.

In mid 2018, SandyHookFacts received the original Wolfgang Halbig email string with attached comprehensive TLOxp of Lenny Pozner.   This is the same report as the one at issue in the arrest and Probable Cause #7 above.

To be clear, Lenny has been dealing with Halbig and his hoaxers distributing his report and information since 2014 and the arrest of Halbig comes via that route; not this blog or information provided TO Lenny by Sandy Hook Facts.

There is substantial evidence of law breaking by numerous hoaxers; that is beyond the scope of this blog and certainly no credit should be applied in this direction. 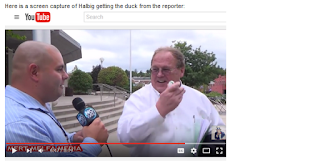 First, before anyone claims there is some attorney-client privilege between Caleb Payne and Wolfgang; Wolfgang waived that when he forwarded this email to untold numbers of people. There is nothing secret here.  Caleb, additionally, knew or should know Halbig sends everything out and that Halbig has screwed over every attorney he has used.

With Halbig's propensity to forward every email he gets to government offices and considering the ongoing lawsuit discovery,: if you have ever emailed Wolfgang, lawyers and law enforcement probably have that.

If you are one of Halbig's evil minions, bent on harassing victims, you may soon have the knock on your door.

As a result of Caleb assisting Halbig, Halbig's and his hoard of hoaxer minions were enabled. They were posting the Lenny report online and emailing it to untold numbers of people with the intent and purpose of harassing families of the Sandy Hook tragedy.

I know Lenny would like to see more charges brought against Halbig's conspirators, so I will not name more of them or go into that further in this blog.   Let us hope his co-conspirators soon get a knock on the door at 1 am from the police and a mugshot photo. 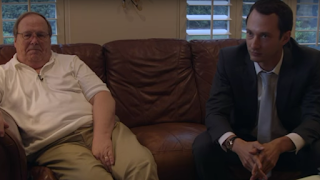 As to the email string, attached to the email was an invoice and email from "Right Way Consulting" billing hoaxer attorney Caleb Payne $100 for "Pozner Research". The "research" was the 187 page "comprehensive" TLOxp report on Leonard Pozner.  Wolfgang Halbig promptly forwarded Caleb's email to hoaxer "Dorothy Hill" with the message "Here is what you requested". 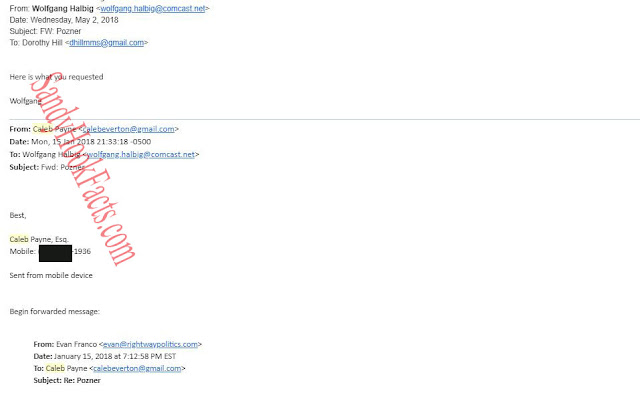 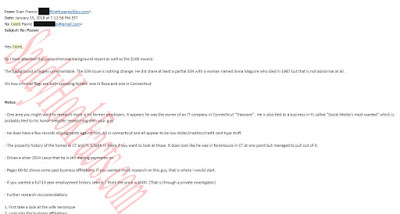 Here, Wolfgang is requesting Caleb Payne confirm Caleb would be his attorney (in the Pozner v. Halbig case).  Caleb ultimately represented Halbig pro bono for a portion of that case. That case was dismissed after Halbig fully complied in removing Pozner's personal information from his website.

Wolfgang to Caleb Payne: "Can you please send me an email that you are going to be my attorney. It will make me sleep better at night".  Caleb, obviously, had the goal of helping Halbig sleep cozy at night while giving Halbig the tools to harass a Sandy Hook victim. 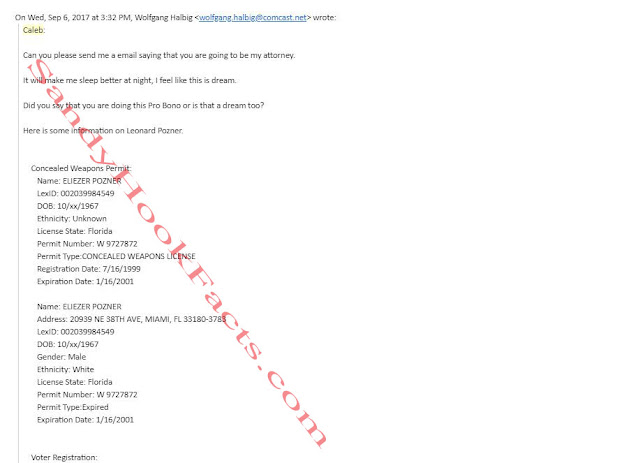 It is no wonder Caleb would be a part of this and would obtain Pozner's report for Halbig.

Obviously Caleb knew or should know what Halbig and his minions would do with the report because Halbig does what he and his hoaxers have done for years, hurt victims of Sandy Hook.

And while Caleb Payne is not directly responsible for the criminal actions of Wolfgang Halbig, reasonable people do not give a well known hoaxer conspiracy theorist like Wolfgang Halbig reports on Sandy Hook victims.

Why would Caleb Payne not use reasonable prudence with the report and his privileges as an attorney?

Well, in an online interview with Dave Gahary (a co-defendant when Pozner sued Jim Fetzer), attorney Caleb Payne exposed himself as a fellow wide eyed irrational conspiracy theorist hoaxer when he openly questioned whether crisis actors were used at the Pulse Nightclub shooting.   Here is the relevant portion of that interview:

Payne went so far as to pay $100 to get Wolfgang a report on Leonard Pozner. A report that had NOTHING to do with the case versus Pozner.

So why would he? Payne should answer that question. Preferably in handcuffs and disbarred, but that is just opinion and hope.


An email Halbig forwarded from Caleb Payne to Wolfgang Halbig 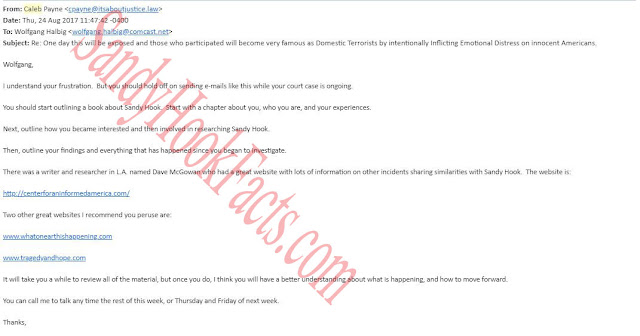 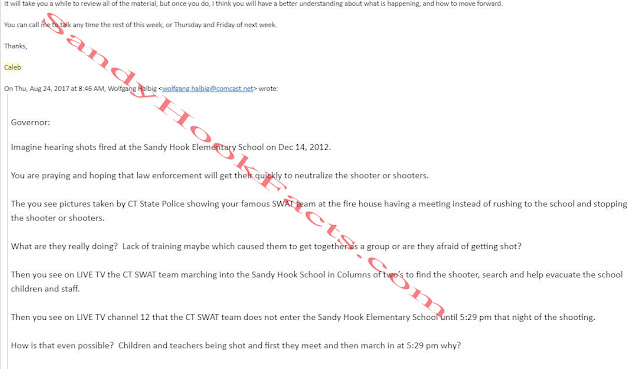 The Invoice from Right Way Consulting to Caleb Payne for $100 for "Pozner Research" - ie the TLOxp Report mentioned in the arrest affidavit. 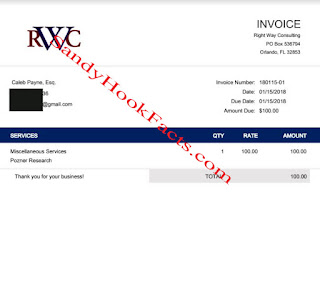 A screen capture of the actual report itself. 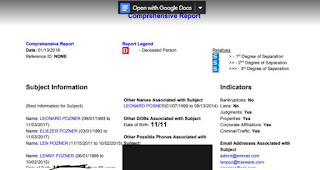 It is worth noting that the one who pulled the report very well could be in violation of the law and terms:

My email forwarding this Caleb Payne email string to Lenny:

The origianl email from Caleb Payne to Wolfgang Halbig containing the report. 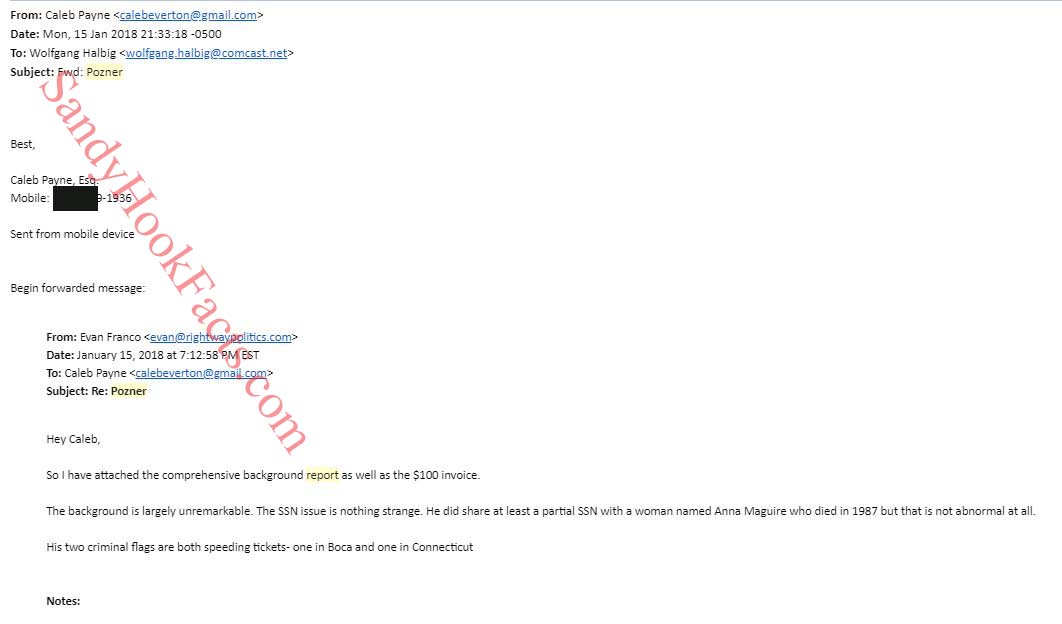