Sandy Hook Hoaxer leader and front man, William Shanley, has pled guilty to Connecticut statute 53a-167a Interfere With Officer/Resisting for his New Years eve altercation with police. It was noted by several people, just prior to the incident, that Shanley appeared to be "losing it".

Shanley was sentenced to 1 year in prison, execution suspended, and is on probation for one year.

Since Shanley no longer appears on the inmate roster for Connecticut's prison system, it appears he may be back on the streets.

There has been no new activity in his "Sandy Hook Hoax" Federal lawsuit where he is seeking 5 trillion dollars in start up money for a new country as well as a few billion for his on own pain and suffering brought about by watching Sandy Hook unfold; or something like that. 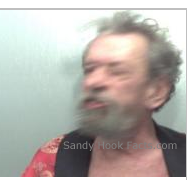 Presented by SandyHookFacts.com at 10:20 PM