A member of Sandy Hook Hoax group ratcheted up the pursuit of Cassidy Stay, the brave sole survivor of the Houston Massacre. A massacre that left the fifteen year old girl's mother, father, and four siblings dead; shot execution style in the head. Ron Haskel, the child's "ex" uncle has been charged with the slayings.

While Sandy Hook Hoax Group has no facts at their disposal with which to conduct critical analysis, they have set about to demonize and stalk the young girl in thousands of posts; members repeatedly posting disgusting photos and commentary, as seen below.

As readers know, Sandy Hook Hoax is a group operated by Tony Mead, Eric Pearson, and a third, nameless Canadian who uses multiple fake names and male and female "fake" accounts, including names such as "swan"  and "Craving Morehead".  Reportedly, Swan/Craving MoreHead uses those accounts to attempt to avoid Canadian Authorities and Canada's very strict stalking and defamation laws.  I have documented Sandy Hook Hoax's proclivities on this blog many times before, most recently when Sandy Hook Hoax  supported Susan Stanton's desire to go to Newtown and dig up Daniel Barden's grave by publishing her article.

The Sandy Hook Hoax Group is a closed and closely monitored group that strictly enforces a group think atmosphere by banning anyone who does support their conspiratorial view point or any in way goes against their ideals.   For example, any member who dared speak out against the Stay family stalking was ridiculed and banned.   This is one such example of ensuring everyone is on board with the group 'activities': 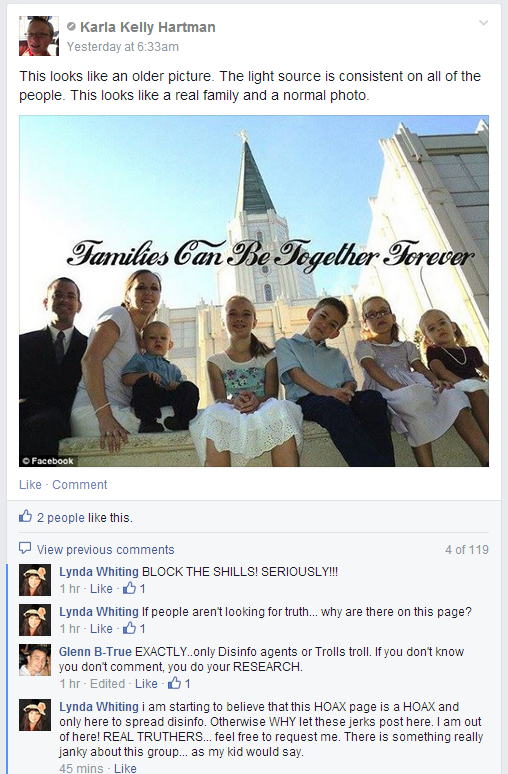 Apparently emboldened by the paranoid group think atmosphere, Houston resident Asia Payne decided she would attend the Stay family viewing and memorial service and report back to the group, much to the giddy like pleasure of the group. Apparently children's funerals are something they relish, as they prepared "popcorn".


Asia Payne's quest began, excitedly asking "Who are we stalking?".  Shortly thereafter, she announced the answer to her own question. Asia had picked out her "purtiest dress" to attend the viewing of the Stay Family. 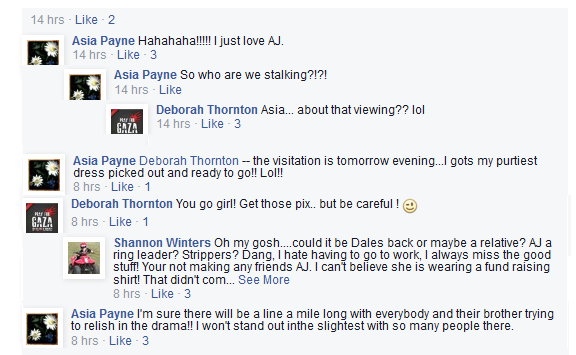 Surprisingly, Asia did go to the Stay family service. An abbreviated version of the commentary is here; full version below. It should be noted that Asia Payne has deactivated her account at this time; thus her comments are no longer available in the group.

At the service, Asia Payne announced she had "hugged her" (Cassidy).  Asia then returned to her seat and announced she was "sitting there shaking with anger", a statement that should send a chill down anyone's spine.  Luckily Asia cell phone died and she decided to leave, without letting her anger take control of her or taking her anger out on anyone in attendance of the solemn occasion.

Here are some of the comments: 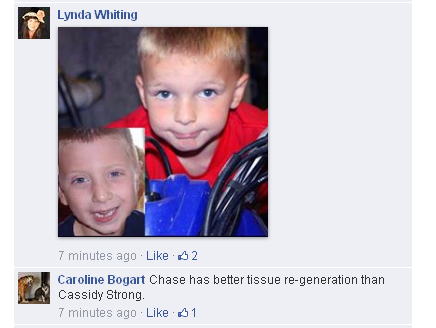 Here are three pdf downloads of their comments (as of 7-15-14):
https://drive.google.com/file/d/0B7v9mTNPg43wSEtxM2VUTHlwTDA/edit?usp=sharing

Yesterday at 7:30pm
Thanks, Satan!