In this analysis series, I am going to put to writing my analysis as first discussed Sandy Hook: The Deadliest Minute.  This series of blog posts will examine the shooters gear up and a step by step analysis of the shooting according to the report and other relevant evidence.

At some point in the morning hours of December 14, 2012 Adam Lanza (hereinafter referred to as the shooter) shot his mother in the head four times.  One of those shots was through the bifurcation of her eye lid, the other 3 shots were in her forehead and orbital region of her head.  The shots were fired at point blank range.   1

The shooter then drove his black Honda Civic to Sandy Hook Elementary School.  As there is some confusion, it should be understood that the automobile was purchased by Peter Lanza for the shooter as part of the divorce agreement. The auto was in Nancy's Lanza's name as she dealt with the registration and insuring of the vehicle (see page 34).  The shooter had removed all items from the car, including his Garmin GPS, registration paperwork, CD's, gun shop notes, etc. and placed it in a white garbage bag he left in the house.  2 Other than weapons, the car was completely empty.

The shooter drove and parked his vehicle next to the "No Parking Zone" outside of the school.  This parking area was outside of the immediate line of sight of staff in the office.

There are no know witnesses to shooter's arrival. It is not known if the car was there when a parent entered the school and was buzzed in at about 9:30 and then walked down the hall; however, after entering the school, she heard gun fire. 3

Full armed, as described in Part 1: The Gear, the shooter retrieved his rifle, a Bushmaster AR-15 style rifle.  The rifle had the double taped tactical magazine loaded into it, fully loaded with 30 rounds (times 2).

The shooter ejected a live round on the ground.  Therefore, at the beginning of the attack he had 29 rounds remaining from his first magazine.

The number of rounds and magazine placement becomes important in computing his path in the school based on a ballistics analysis.

The shooter left a Saiga-12 semi-automatic shotgun in the rear passenger seat of the car along with two additional magazines loaded with 12 guage shotgun ammunition.  A Saiga-12 is patterned after the AK-47; however, it chambers shotgun rounds.  The appearance and style of this weapon  confused many who viewed the familiar footage of the weapon being removed from the vehicle. The shotgun was often confused as a rifle by press and bloggers.

The shooter walked up to the front of the school and fired eight rounds in a circular pattern into the glass to the right of the main entrance doors.

The shooter then quickly enters the school building.  Seeing the shooter, school secretary Barbara Halstead quickly ducks behind her desk.

To retrace the steps of the shooter once inside the school, we will examine ballistic evidence including casings, magazines, and victim placement and match that with the witness statements. When comparing that data and considering the timing involved, his path inside the school is clear.  Evidence maps from the final report are listed under references.  4 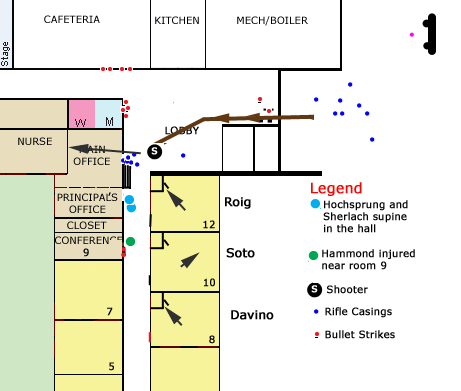 Upon hearing the sounds of glass crashing Principal Dawn Hochsprung, who was in a meeting in Conference Room 9 with several staff and a parent, yelled "Stay Put" and exited.  Following her was school psychiatrist Mary Sherlach and in the rear was Lead Teacher Natalie Hammond.


The shooter marched in and seeing the staff coming towards him,  fired 6-7 [see note] rounds.  All 3 educators go down. There is no evidence in the report to suggest Hochsprung or Sherlach ever moved after these shots. Hammond states "she saw Hochsprung and Sherlach fall down in front of her.  [She] felt a a gunshot hit her leg and felt a burning/warming feeling in her lower leg."


Hammond continues "[I] laid still in the hall way [for] approximately 10 seconds and then looked down the hallway  [and] didnt see the gunman.  [She] crawled led  back into the Room 9 conference room.  5
Down the hallway, Deborah Pisani, a Kindergarten teacher's foot is grazed by a round.  She is the most recognizable victim because she was later video taped being loaded into an ambulance.


Hammond did not see the gunman because he had entered the office.  The school nurse, Sarah Cox reports that after hearing gun fire, she behind her desk.  She observed the gunman enter her office, stand there for a moment, and then quickly exit.

The gunman exited the office.  The report lists that there are 10 rifle casings right next to the bodies of Hochsprung and Sherlach.

Note on casings: 17 casings were found in the hallway area. With the evidence provided in the report it is difficult to determine exactly where the shooter shoot when firing all 17 of them because it appears some of the casings were kicked around during the evacuation. 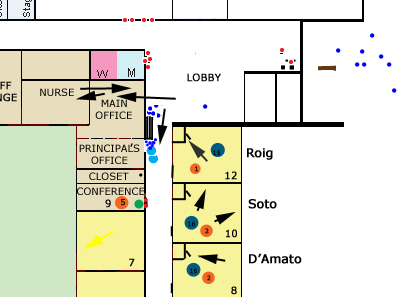 While the police did not release the forensic examination data for those two victims, this indicates the shooter stood directly over their bodies and at point blank range, fired 10 rounds.  Additionally, he pulled out his Glock 10 mm pistol and fired one round. I believe this struck the doorway area of Room 9, where Hammond and others are huddling in the conference room.

At this time, someone has activated the PA system and the sounds of gun fire echo throughout the school over the system. The entire school is alerted and goes into "Lock Down".

Following their training, all teachers begin huddling their students into corners, when possible, lock or barracade doors, and attempting to keep them calm through various comfort measures.  The acting head janitor, Rick Thorne is working in the south hallway, opposite the shooter, and begins locking doors from the outside and warning classes.

The shooter has ejected one live round near his car and now has fired a total of 25 rounds.  He has 4 rounds remaining in his rifle.  He moves quickly into Room 10. 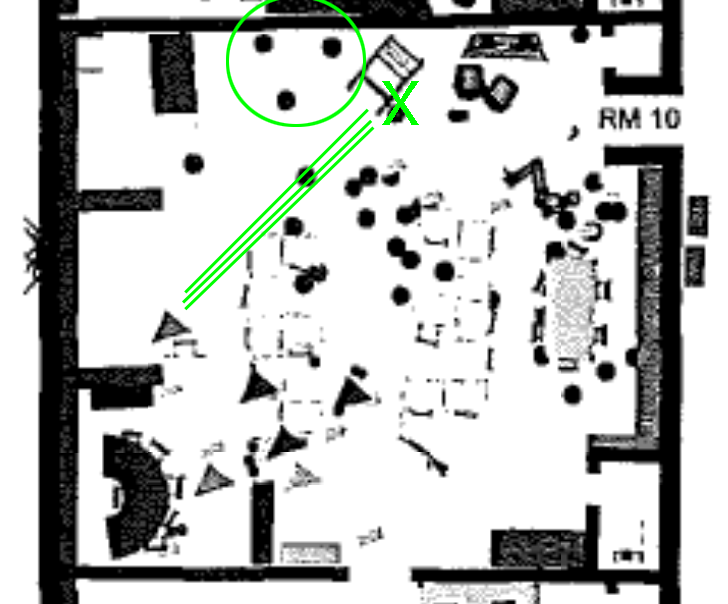 The shooter moves to the center of the room and opens fire on his first target in Room 10, teacher Victoria Soto.  The classroom has not had time to hide and it appears some of the children are in the area of the restroom and some moving towards the North west corner of the classroom.

The report indicates Soto is found near the north wall. 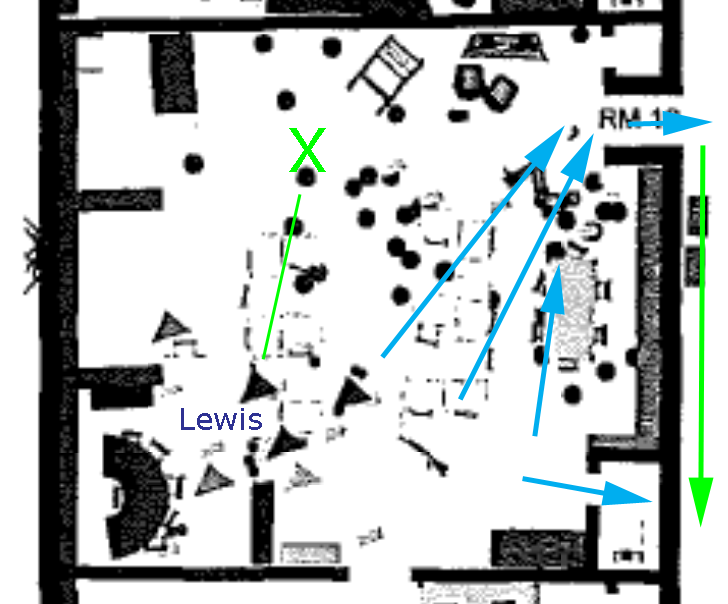 The shooter fires 4 rounds, and based on the casing placement, it appears he was advancing on Soto as he fired; the final fourth shot only a few feet away.  The shooter trains his weapon on others; however, he is out of ammunition. The shooter turns his tactical magazine over.

While the report is silent as to most of the details of the children's injuries, the parents of Jesse Lewis have gone on record to state that that Lewis stood right in front of the shooter and yelled "run" as the shooter reloaded. Several children escape out the door at this time.  Two children, a boy and a girl, hide in the restroom.

The gunman turns his magazine over. The first shot is likely Jesse Lewis.  The shooter shoots him once in the forehead, silencing the brave boy.


School secretary Barbara Halstead calls 911 at 9:35.   The sounds of the shots in Room 10 that are occurring at this time are clearly heard in background of this 911 call.  Another call, made by the parent in Conference Room 9, also document the firing in Room 10. 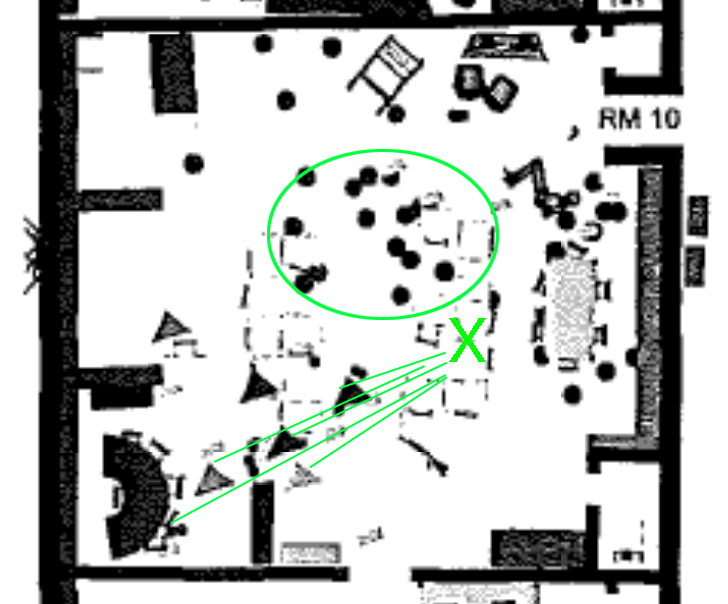 Following the casing placement as provided in the report, it appears the shooter moves towards his right, cutting off the escape route and opens fire.  He empties his magazine, firing 29 more rounds, killing teacher Ann Murphy, who died attempting to shield boy, reported to be Dylan Hockley.  Hockley, is also killed.  First graders Allison Wyatt are killed Avielle Richman,   Olivia Engel, shown in the graphic as laying under the table in north west corner of the classroom is reported to have been shot once in the neck and is mortally wounded.  Later, she will be carried to an ambulance and pronounced dead at Danbury Hospital.


The escaping Room 10 survivors run up the road. The firehouse is completely locked and empty, the children continue up the road. Some stop and are talking to a bus driver in the yard of neighbor Eugene Rosen. Others continue running and are stopped by a parent, who ultimately takes those children to the Newtown Police Department.

Room 12's first grade teacher Kaitlin Roig and Room 8 substitute teacher Rachael D'avino are mirroring each other in their attempts to hide from the gunman and protect their children.  They are attempting to pack their students into the small restroom located in the southwest corner of their classroom. Roig is successful in getting her children packed into the small restroom.


The shooter, in room 10, drops his empty double magazine on the floor and loads another magazine of 30 rounds. He again ejects a single live round on the floor.

Room 10 is silent. Nothing is moving.  He has fired 34 rounds inside this classroom.

He is not done.  Room 8 is next.  He knows he needs to move quickly; the police station is only a few miles away.

This will be covered in Sandy Hook School Shooting Analysis Part 3: The Deadliest Minute. 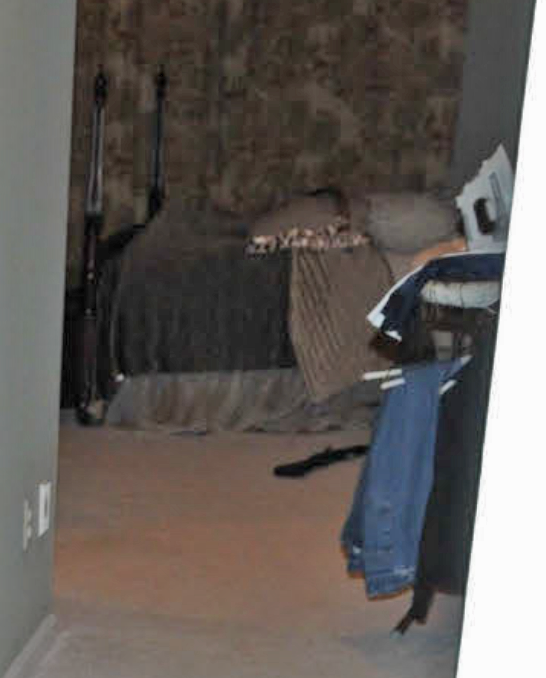 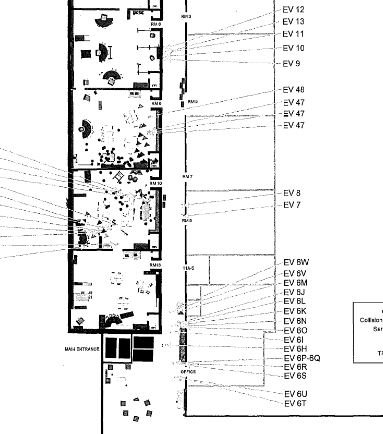 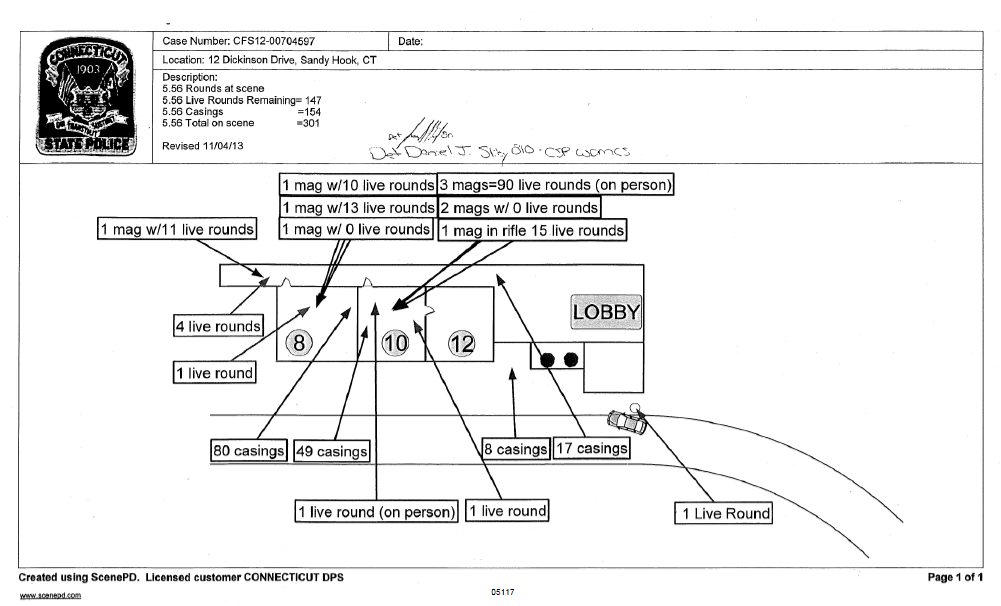