State of Connecticut  vs Jonathan Reich
Entire Case and motions on hold.  Jonathan Reich is wanted with a $100,000 warrant for his arrest for Failing to appear in court.

Lenny Pozner sued Wolfgang Halbig for publishing private facts.  Wolfgang filed an answer. Halbig's attorney was then fired or removed from the case in some manner, and Halbig decided to proceed Pro Per (without an attorney).  Halbig's first act as his own attorney was a laughable poorly worded attempt to demurer to a complaint he already answered denied.  You can't do that!

Pozner filed a motion to strike Halbig's ill conceived demurer, in addition to a request for sanctions and attorney fees.  Halbig is delaying proceedings with nonsense motions and refusal to answer simple questions.

Instead of complying with disocover, Halbig responded by filing his "Citizen's Complaint" against the Lake County Sheriff's Department (as if that has any relevance at all).

Never was the saying "A defendant who represents himself has a fool for a client" more true than with Halbig's filings in the Lake County case. Mr. Pozner should get more attorney fees just for having to read  Halbig's second frivolous filing; and Pozner just might!

If you want to  read Halbig's complaint versus Lake County Sheriff, you can read it here:
https://www.pdf-archive.com/2016/10/16/cso-complaint/preview/page/2/

The ongoing lawsuit may be viewed here
https://courtrecords.lakecountyclerk.org/showcaseweb/#/caseDetails/1335568/dockets

Halbig has been on air promising more lawsuits versus Debunkers.

On 9-29-16 the defense was was awarded $3,954.30 in attorney fees.  This could account for Halbig's renewed fund raising efforts as he attempts to pay that judgment.  There is no record that Halbig has paid his debt. 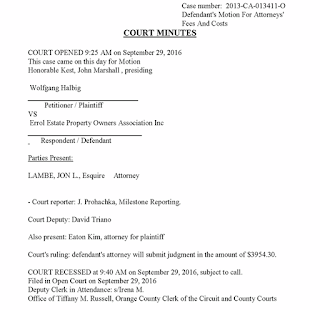 William Shanley's final frivolous appeal regarding his dismissed frivolous lawsuits was dismissed by a federal judge a few days ago. Shanley has no more pending litigation regarding Sandy Hook. 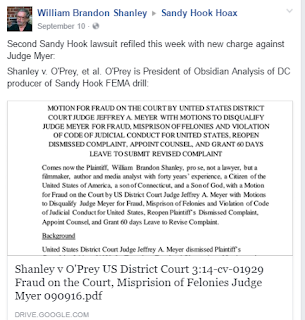 Shanley's case was dismissed by the appellate court on 10-13-16. 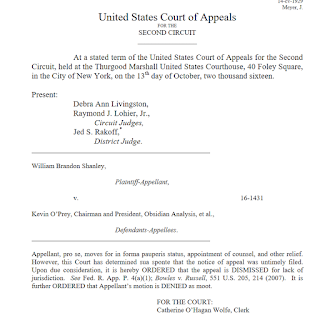 James Tracy's wild eyed conspiracy allegations did not pan out and he had to file an amended complaint removing several defendants from the suit.  Discovery in the case is ongoing and a motion to dismiss is currently pending.
Presented by SandyHookFacts.com at 2:53 PM

"State of Connecticut vs Jonathan Reich
Entire Case and motions on hold. Jonathan Reich is wanted with a $100,000 warrant for his arrest for Failing to appear in court."

So, Jonathan Reich IS A COWARD...too afraid to face his accusers in court? Shocker.

How about the FOIA on the shooters computer documents?

Any new on the Dave Altimari FOIA on the shooters records and documents? Do you know if any information was released to the families to maybe help them understand any of the tragedy?

THe appeal is ongoing and in it's early stages. I forgot to include that case. The preliminary "issues on appeal" docs were filed. There are no real updates on that case.

Thanks for the reminder!